To understand whether or not this is true, we need to look back into the Bible. Before Jesus came to Earth, no one on Earth knew who Jesus was, and Israel worshiped God as the One True God. Since no one knew who Jesus was, and with Jesus being crucial to trinitarian doctrine, there most certainly could not be anyone who believed in the trinity doctrine.

Progressive revelation and salvation before Jesus came to Earth

How then could ancient Israel be saved then if they did not believe in the trinity? According to Christianity, there is a doctrine called “progressive revelation”. What this means is that as history unfolds, more about God and the nature of God and the universe is revealed to the people.

For example, ancient Israel did not know about Jesus (although the prophets did allude to the Messiah but the people did not know this was Jesus yet), so they could not believe in Jesus. Yet Jesus said that the only way to heaven is through Jesus, in John 14:6 when he said, “I am the way and the truth and the life. No one comes to the Father except through me.”

Does this mean that no one who was alive before Jesus came to Earth is in heaven? We know that isn’t true because the Bible explicitly described Abraham as being in heaven (Luke 16:22), and Elijah was taken up to heaven (2 Kings 2:11).

If people could get to heaven without accepting Jesus as their personal savior before Jesus came to Earth (although not after), then this is an expression of what we call “progressive revelation”. Likewise, if God really is a trinity, then it is okay that the ancient Israelites did not believe in the trinity, because it had not yet been revealed. Now that we have that sorted out, what we really want to know is what sets Christians apart from other religions.

What set the ancient Israelites apart from other world religions?

In 1 Kings 18, the Israelites had strayed away from God, under the ungodly leadership of King Ahab, a godless king who disobeyed God and led Israel astray. At that time, the Israelites worshiped false gods, namely Baal. There were only a few priests for the One True God of Israel and Abraham and Isaac; and there were hundreds of false prophets – 450 to be exact – serving the false god Baal.

Elijah proves who the real God is

Long story short, one day Elijah came up with a plan. Elijah built two altars, one an altar to God and one an altar for the false god Baal. On it were laid the traditional animal sacrifices. Elijah’s plan was to have the hundreds of false priests and false prophets and all their followers pray to the false god Baal and have it send fire from heaven to burn up the altar, if their gods were real. And if the One True God was the real one then Elijah would pray and God would send fire from heaven to burn up the altar to God.

Then Elijah prayed and even asked for lots of extra water to be poured over the altar until even the trench around the altar was filled with water. Then Elijah prayed and immediately the real God sent fire from heaven and it burned up the altar and all the water and everything. Not a drop of water was left, the fire consumed it all (1 Kings 18:21-46). 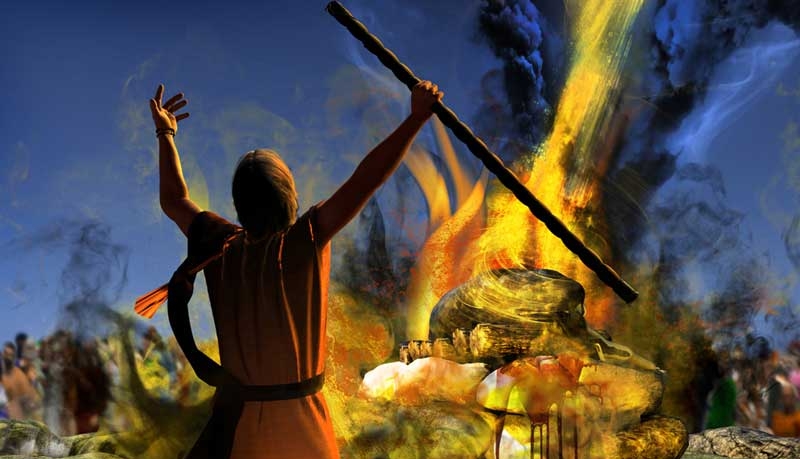 What sets Christians apart from other religions today?

Nothing has changed today in this regard. It is not the trinity doctrine which sets apart Christianity from the rest of the world religions. What sets us apart is that our God is the true God, the true Creator; and all other religions follow after false gods. It is not a matter of doctrine.

What about Islam? What sets Christians apart from Islam? Of course, there are many things, but fundamentally, what is the biggest thing that sets us apart? Is it the trinity doctrine? Is it because Allah is just one god, while our triune God is 3 in 1? Nope. What sets us apart is that the God we worship is the One True God, the true Creator of the universe. Islam worships a false god, Allah, who is really Satan. Islam worships a false god, Christians worship the true God.

Focusing on doctrine takes focus away from God

The same is true for all other religions. Doctrines are a work of Man. Humanity created doctrines, which are effectively interpretations of scripture; and believing that any doctrine is what sets Christianity apart from other religions takes the focus away from God.

While God being the true God makes God the reason that Christians are set apart from all other religions, many Christians today [unintentionally] take away this focus from God and put it on themselves and their doctrines. They want to feel good about being “right”. They are effectively saying, “I’m better than [the other religions].”

Modern Christianity is not the only religion with a Trinity doctrine

The trinity doctrine, which is not accepted by all Christians, is not exclusive to modern Christianity. There have been many satanic trinity religions, and even today some still exist. This may be for another article, but the truth is that the trinity doctrine began with the Nimrod and the tower of Babel – possibly earlier. We don’t know what false religions there were before the Flood, because everything was destroyed.

When King Nimrod, who built the Tower of Babel, was killed, his wife Semiramis began the first known incarnation of the trinity doctrine. She claimed Nimrod was the Sun god, and that her son, Horus, was the reincarnation of Nimrod, therefore the savior king sent to Earth. In reality, she had an affair, because she became pregnant after Nimrod’s death – she said that the spirit of Nimrod, whom she said was the sun god, therefore a “holy spirit”, had visited her and impregnated her.

Therefore, with Semiramis, we have the identical trinity story: a miraculous conception, where god was reincarnated into a baby, by the spirit of god. Notice I put “god” in lowercase, because clearly she made up this false religion.

This same satanic false religion was perpetuated from that day forth in many iterations. Of the many include Isis and Osiris of ancient Egypt, of which the Romans had their iteration including the sun god Sol Invictus; and today we have Brahma, Vishnu, and Shiva of Hinduism; and a more esoteric form of a trinity, in the Buddah trinity: dharmakaya, the body of ultimate reality; the sambhogakaya, the body of joy; and the nirmanakaya, the Buddha’s conditioned, human body of flesh and blood.

There is also Zoroastrianism, which has a sort of trinity, as one author writes: “From Ahura Mazda [threefold before other creations] came a duality: the twin spirits of Spenta Mainyu (the Holy or Bountiful Spirit) and Angra Mainyu (the Destructive or Opposing Spirit).” This is to name a few of the trinitarian religions, of which some are literally the same as the Christian trinity, such as the religion of Semiramis.

What sets Christians apart from other world religions

First Condition of Salvation: You Must Forgive Others In Order To Receive Forgiveness By God

Heliocentric Fallacy | Is The Sun Really The Center Of The Galaxy? What Does The Bible Say? What Does Science Say?

Third Condition of Salvation: You Must Continue In The Faith, Never Turning Away, To Receive Salvation

Are We Meant To Literally Move Mountains?

The Corrupt Latin Vulgate Version
Scriptural Proof that Purgatory Does Not exist
Does the book of Hebrews say that the Old Covenant of Moses is taken away?
When Did Jesus Rise From The Dead?
Theosis: Partaking of the Divine Nature | Antiochian Orthodox Christian Archdiocese
Communion, a Sacrament That Can Kill You
The Prophetic Years | Bible Prophecy - End Time Worldviews